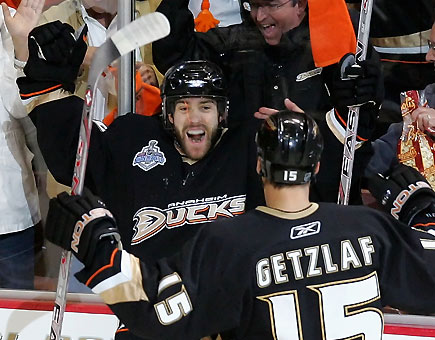 Next year in honor of the Stanley Cup, should the Penguins make the playoffs, I'm growing a playoff beard, since I'm pretty sure Sid Crosby can't yet.

What? The Stanley Cup is over? I didn't even know it had started? Darn this whole "Not on TV" thing the NHL has gone to. Yet, I must say, it is an interesting way to bring in more fans to the great game of Hockey. Anyways...GO WILD! (I think they were in the playoff?!?!)

Spinler, the playoffs were aired, every single game on either VS or NBC. The last three games of the finals were aired primetime on NBC.

Unless the horsies were running, then NBC said, "Screw hockey!" ;)

"Screw Hockey!" and "Hello gossip about rich people there to watch the horsies"

I know they were televised on OLN, whoops, I mean Vs., but I was more taking a jab at the "mentally deficient" employees running the Marketing Department at the NHL headquarters who decided it would be awesome to take hockey off of any sort of channel that people either had or even knew covered sports other than the Tour de France and PBR (Yes, I do occasionally watch Cyclism Sundays...laugh away). Congrats NHL, you continue to run your sport into the ground.

I believe it was one of those ATH panelists who wrote a 10 step plan to improving the NHL. Me? I've got a much simpler plan and I'll explain in two.

1) Get back on ESPN. Let the marketing juggernaut that is the Mothership of Sports and such do what the Mental Lemmings of the NHL's marketing department (if such one exists) do what they do. Hell, they've been making people care about baseball for years and that's about as exciting as watching Rosie dry hump... never mind that.
2) Market your stars. I'm not an avid NHL watcher, but I can tell you some stars that come off the top of my head. The league's not devoid of talent, so do what every other damn sport in the nation's doing and MARKET TOWARDS YOUR MARQUEE ATHLETES!!! Make people in these cities and markets want to tune in or drop the dollars to see them play and...well, you know the rest.

Ratings for the Cup were in the crapper
for NBC because hardly anyone knew it was on, unless you caught highlights on Sportscenter. Fans can't keep up with a sport if it's on a channel they have never even heard of (and I've gotten a few calls at work from folks asking me what network was carrying the playoffs and even they were like stupdified at the answer).

Congrats to the Ducks for winning it all. And for the love of all that's right with the world, SHAVE YOUR BEARDS!

The ugg boots tess suede are one of the most http://www.designershoeuksh... Prada Shoes popular women's sheepskin boots. Insole features a genuine http://www.casub.com/ Canada Goose sheepskin sockliner that naturally wicks away moisture and keeps feet dry.Stacked leather outsole http://www.uggsatcanada.com/ Ugg Boots and heel continue the western flair of this chic boot. this style is designed to be worn barefoot to maximize the http://www.ghdieshops.com/ GHD Hair Straighteners benefits of the sheepskin. Precision craftsmanship is evident in the boots Fleece footbed will form to http://www.designershoeuksh... Mens Prada American Cup Shoes each foot individually. 6wG8YwWP84bQ12-26

Nike Air Max 2010 is to achieve a relaxed and happy to find. While listening to music to find their own courage,http://www.top-runningshoes... and no milk rather the feeling of fatigue. You can walk
to the rhythm of the music, your heart stable, holding a rhythm, you can light phase. They must ensure that all the best on the effect of the exercise. Most of us always
try another understond. Have their own music, you will find that you can understand each other.